When your child’s teeth grow out and you’ve kept them on solid baby food for months, it’s time to start transitioning them to real food. If you’ve raised babies before or have had experience with children, you’ll know how difficult it becomes to feed children healthy food. At one point, they stop becoming babies who’ll eat anything mashed and will turn away from anything green and healthy in favor of processed chicken nuggets and anything coated in cheese or chocolate.

So, how do you get your kids to develop the habit of eating healthy? Well, the first few years are actually the most crucial.

Once your child is around 8 to 10 months, you can start to give them soft and textured food to get them adjusted before transitioning from baby food to more textured food. Soft food such as cheese, mashed bananas, and soft potatoes can introduce them to more flavors not found in usual baby food flavors. If you have the equipment at home, you can also start pureeing meats so they start liking the taste of meat early.

One thing I always tell parents is that this stage is the most crucial part if you want to avoid a picky eater or a kid who doesn’t like vegetables. You have to start getting them adjusted to the flavor and texture of vegetables. Feeding them vegetables such as broccoli, cauliflower, asparagus, and squash will help them get accustomed to the taste. So, when they grow up into young kids, they won’t be unfamiliar with the taste and will be more willing to try new vegetables.

Avoid adding too much salt, sugar, or any seasoning or dips that will coat the vegetable’s true flavor. These are unhealthy and cancel out the nutritional value vegetables provide. You need to show them the real flavor of vegetables and wait for them to adjust to it. 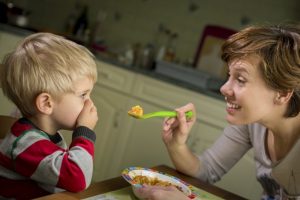 If your child is already beyond the point of transitioning to real food and you’re still having problems trying to get your kid to eat healthy, don’t fret. There are still simple ways you can adjust your kid’s diet to a much healthier one.

As a father of three, I’ve had to go through some trial and error before I found an effective way to get my children to eat healthy. Instead of force-feeding your kid to eat vegetables and punishing them (e.g. leaving them on the table and not letting them leave before they finish their vegetables), I found that it was much more effective to use positive reinforcement.

Give them the Perception of Choices

We were all once children, and I think we can remember how much we disliked being told what to do. The same goes for children: if parents keep telling kids to eat their fruits and vegetables, it seems more of a chore than it really is. They want to choose for themselves, so give your child a semblance of autonomy by letting them make their own choices.

If they’re looking for a snack, let them choose, for example, between apple slices and pear slices. Or carrot sticks and celery sticks. Or a combination of fruit and vegetables. You control what they eat and make sure they get healthy options while at the same time giving children the belief that they have a choice to pick which one they want.

For meals, don’t pile on vegetables on their plate and force them to finish it because they’re not choosing to put that on their plate, so it’s like you’re forcing them to eat. At our home, my wife and I practice family-style meals; instead of preparing our kids’ plates and then serving it, all the food is placed at the center of the table and we allow our kids to pile on as much food as they want.

If your kid is very young, it could take a few tries. They might not know how to portion their food right, but eventually, they’ll be more willing to add healthy food if their parents aren’t forcing them to do it. 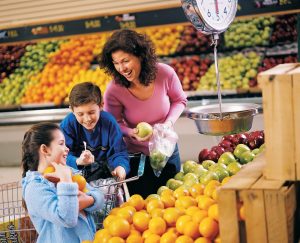 It seems odd, but it’s an effective practice that has helped me and my own children. My wife and I didn’t feed our eldest meat purees, so the only meat she would try was chicken, since she thought cooked pork and beef looked “icky.” One day, my wife took her with her while she ran some errands, and she ended up in the butcher, and our daughter was fascinated by the different cuts. That evening, my daughter tried a cut because she recognized one of the pieces as something similar to what she saw.

The same happened to our youngest, who hated vegetables. One trip to the farmer’s market, and he liked looking at all the vegetables and the way we picked out several vegetables. He then pointed to some baby corn and asked if we could buy it. We said we could, and we could cook up a delicious meal, but he had to be willing to eat it. That night, I made a quick stir-fry with other vegetables. He didn’t try all the vegetables, but he ate corn, peas, and carrots for the first time.

Your kids are more likely to give healthy food a chance if it’s less of the “adult food” on the table and something they’re actually interested in. Let them see how you buy the ingredients and how you cook it so that they know what it is. 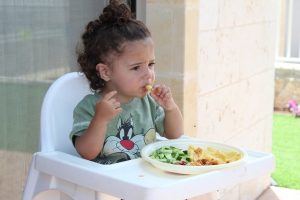 Sometimes getting your kids to eat healthy is as easy as not saying anything at all. You can tell your kid that the food tastes good and they should try it – and then leave it at that. Kids are very young; they don’t care if the food they eat is healthy, so don’t tell them they should eat something “because it’s healthy.” Sometimes, the word “healthy” is a red flag for them, synonymous with the words “yucky,” and “gross,” and “bitter vegetables.”

Don’t try to teach your kids about nutrition by labelling food as good or bad. Junk food and soda are bad, yes, but banning it for your kids turns it into forbidden fruit that your kids will want to taste, which could lead to them obsessing over it as they grow older. It is okay to feed your children chips and cola, but in moderation.However, avoid using sugar and salt to make food taste better, since it could teach your kid that mixing unhealthy seasoning with healthy food will still be okay.

Most importantly, avoid saying “eat your vegetables.” It becomes a chore and a task, and your kids could be more reluctant to finish their food. Just make sure your kid has access to vegetables and allow them to make their own healthy choices.

Feeding your child can be difficult but feeding them healthy food is the real challenge. My advice is to start feeding them vegetables at a very young age and then allow them to make their own choices so that they don’t see eating vegetables as a chore, but as a part of their everyday lifestyle.